As we know, a Sudoku Puzzle Template is a 9×9 matrix of 81 Spaces, which are initially all empty. 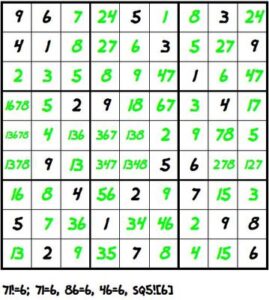 These 81 Spaces are grouped into 9 Squares, each containing 9 Spaces.

Instead of referring to a Space location by Row and Column, Spaces can be referred to by Square and Space number. For example, instead of referring to Row5:Column5 (R5C5), one can refer to Square5:Space5 (55 for short, the Square is assumed to be the first number and the Space the second).

So, visualize a Sudoku puzzle and the location of Space 11 (the first number is the Square, and the second number is the Space). Where is Space 11? That’s right, the upper left Space in Square 1. Where is 99? That’s right, the lower right Space in Square 9. How about 62, 85, 19, 53, and 47? Try not to look at a puzzle and just visualize the locations. Also, use an existing Sudoku puzzle, point to Spaces at random, and identify the Square and Space. When you get the hang of it, it’s pretty neat.

So why bother with Another Method of Space Reference?

Well, there are a couple of benefits… One is to break away from the spreadsheet paradigm. In a spreadsheet paradigm, a Cell containing a number is usually involved in a math operation (add, subtract, etc.). For those familiar with spreadsheets, referring to Rows, Columns, and Cells in a Sudoku puzzle is just teasing a part of your brain that wants to employ spreadsheet thinking.

The “numbers” used in a Sudoku game are not numbers. They have no value. An “8” is not “higher” than a “3”. There is no subtraction or addition. The “numbers” used are simply nine different symbols. Try substituting some Alphabet characters for some “numbers”.

I substituted an “E” for a “2” and a “G” for an “8” (my initials EG for my favorite number, 28, see the example attached). The puzzle doesn’t become unsolvable. It is otherwise the same as the original. (Admittedly, using numbers as symbols is still handy for checking your work, so I don’t recommend changing to other symbols as a regular habit.)

The positive difference in recognizing the puzzle entries as symbols instead of “numbers” is that the puzzler begins to think more in terms of pattern recognition rather than mathematics. Acknowledging that Sudoku uses symbols instead of numbers promotes non-numerical thinking. It’s more about patterns and has nothing to do with arithmetic. Trying to minimize the use of spreadsheet terms will help to stay focused on pattern searches.

Yet the main benefit of referring to Squares and Spaces is the ease of pinpointing a Space location. If you examine the possibilities for Space 65, it’s easy to visualize the specific space I am referring to, Square 6 Space 5. And if I say compare 45 and 65 for a Hidden Pair. Identifying the locations in your mind and on the puzzle is very easy. But if I say, “Compare the Spaces Row5:Column 2 with Row5:Column 8”, most puzzlers will have to refer to the puzzle and count down 5 Rows and then over to Column 2 and then over to Column 8. The puzzler will usually not be able to visualize the referenced locations in their head.

So, hopefully, this article nudged you forward in perceiving a Sudoku puzzle as a set of symbols and not numbers so that your puzzling attentions will be more inclined towards pattern recognition. Also, by using Squares and Spaces to refer to locations in your puzzle, you can more clearly document and communicate your puzzle solutions and observations.