This methodology is easy to utilize, but the explanation is wordy so stay with me. Start the Clock! 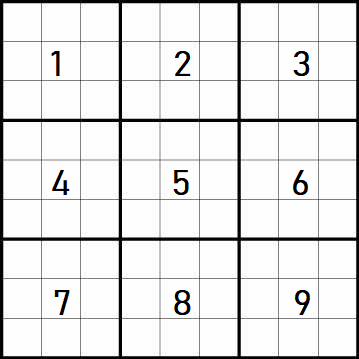 There are 9 Squares (each containing 9 spaces) in a Sudoku template, and each Square can be harvested for 6 clues that extend to other Squares; so, total, yes, that’s 54 Clues. (The above Sudoku layout can be used to help visualize the following explanation. I identify the Squares from 1 to 9, starting from the top left of Square 1 and moving to the right, then wrapping to Square 4, and wrapping again to Square 7.)

So, Where do we Start?

Our discussion will be limited to Square 1 but can be extrapolated to all Squares. If you have puzzling materials (see my other article), use them to follow along with the discussion, marking the spaces identified. Also, if you have ANY finished Sudoku game, you can use that to help visualize the discussion.

Examining further, one can observe that the B’s in Square 1 will occupy the spaces identified as B’s in Squares 4 and 7. (Yes… again, there is overlap within Square 1, ignore it, it’s not important.) Continuing the observations with C, D, E, and F, the puzzler can conclude that there are 6 perspectives for the entries in Square 1 (and, in fact, for each Square, resulting in a total of 54 Clues). Notice that the Square 1 discussion directly relates to Squares 1, 3, 7, and 9, as they are all corner squares. Squares 2, 4, 6, and 8 are all middle squares, so you will have to extrapolate the discussion a bit based on their position, as well as Square 5 holding down the centre of the puzzle template.)

I recommend that you study completed Sudoku games, any game will do (Easy to Hard) and practice observing these groupings of entries. Once 54 Clues is mastered, your Sudoku resolution skills will step up at least one notch.

Did we make the Five Minute goal? Hopefully, yes, and it was time well spent.