Do You Sudoku ?™ the electronic Sudoku handheld game is an attractive looking game. That was my first impression of the Amazon.com online catalog picture.

The product description for this Sudoku handheld game was essentially non existent. Just a picture, price, and sales pitch for a free toy if I spend $50 (US) or more. (A Sudoku book would be a better gift.)

Do You Sudoku ?™ Handheld Game 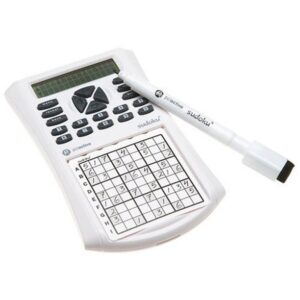 Low and behold, the stylus was actually a marking pen. The grid wasn’t an LCD touchscreen, but a wipe-off board. Electronic? Yes, but… it wasn’t what I was expecting.

Still it is an attractive electronic game (sort of) that can generate 10,000 puzzles and check your answers.

This game was designed in England, manufactured in China (where else these days), and distributed in the United States by University Games Corporation.

“Do You Sudoku?™” is designed with three levels of difficulty. You insert one of the ten double-sided grid cards into the place provided.

The grid has a series of holes (binary code) that tell the electronic handheld game which difficultly and game pattern you have selected to play.

There are three grid formations: 6×6 for beginners, the classic 9×9, and a 12×12 for advanced Sudoku players.

Each grid is a wipe-off board with the locations of the “givens” (the starting games numbers and location) in grey cells.

After you power on the “Do You Sudoku?™” hand held game, you will be prompted (briefly) on the two line LCD display to enter your numbers. (the givens)

The LCD screen will then display the first two rows of the “givens”. The “givens” are in inverse video (white on a black background). You enter these numbers in the grey boxes using the provided marking pen. These “givens” are small and hard to see under some light conditions.

After entering the first two rows, you will need to scroll the display to display the next row or two. This is easy to do. Just press the down arrow key a couple of times.

Each row begins with a letter. A for the first row, B for the second, etc. This makes it easy to tell which row you are looking at. Each grid line on the wipe-off board is labeled with the same corresponding letter.

After you have entered all of the “givens”, you are ready to start playing “Do You Sudoku?™”. You solve the Sudoku puzzle by writing your solution for each cell on the wipe-off board.

If you are new to playing Sudoku read my article “How To Play Sudoku“.

Also read my article “Sudoku Tips” for some proven techniques that will help you solve Sudoku faster. The instruction booklet does not provide you with any great discourse on how to play Sudoku.

To check the results of your game, you need to enter each cell into the “Do You Sudoku?™” hand held game. You can do this while you are playing or after you have completed the puzzle.

Either way, it requires you to manually cursor to the cell position on the two line LCD grid, and then press the number to enter your choice. Wrong entry? Press the clear button to erase your mistake, and then re-enter your number.

Like a hint while playing? “Do You Sudoku?™” has a “reveal” key. You can get the solution for a single cell or for the complete game.

“Do You Sudoku?™” is a timed game. It scores your answer by allotting points for each cell, each region, each column, each row, and the total game completed correctly.

If you scored 500 points or more you will be able to add your name or initials to the Hall of Fame. Keying in your name requires the equivalent of using a telephone keypad numeric keypad to translate a number into a letter.

Done? Great! Play another game. You can use the same grid card and “Do You Sudoku?™” will generate a new game. The pattern will remain the same, but the “givens” will change. If you want another pattern, then you must insert a different wipe-off grid.

Pluses: “Do You Sudoku?™” is an attractive Sudoku handheld game. It can generate and check your answer to 10,000 Sudoku puzzles. It has three types of grids 6×6 for beginners, the classic 9×9, and a 12×12 for advanced Sudoku players.

Minuses: My main annoyance is that you must transcribe the puzzle on to a wipe-off board with a pen. This wipe-off board can be easily accidentally erased or smudged. If you haven’t saved each cell’s solution as you go, you get to re-do the puzzle at least partially. (Bummer)

It would be nice if the wipe-off grid was larger. There is very little room on the 9×9 grid to “pencil in” some candidates. Forget even thinking about it on the 12×12 grid unless you can engrave the Declaration of Independence on the head of a pin. (That’s small!)

These are the facts my friend. You can decide if this is the Sudoku handheld game you are looking for.

Download this free Sudoku worksheet to help you solve all of your Sudoku puzzles. This handy Sudoku Excel template will allow you to enter and remove…

Sudoku Solver Review Use a Sudoku solver to solve your most difficult sudoku puzzle instantly! You have several Sudoku solvers from which to pick. I…