A Sudoku XY-Wing pattern occurs in many of the more difficult Sudoku puzzles. Your ability to identify and solve this pattern will often break the logjam and lead you to the solution of a challenging Sudoku game.

In this article, I use two of my hand crafted very difficult puzzles that have a known XY-Wing pattern. If you would like to try to solve the first puzzle, download and print out this PDF Sudoku very hard puzzle #13 and follow along. I’ll wait. Back? Great. Let’s get started.

If these terms are not familiar, read my article Sudoku Tips for an illustrative guide.

If you have trouble getting to this position, follow the steps I have outlined in my article Sudoku Directions.

The XY-Wing pattern is made up of three cells that form a “Y” (with a little stretch of the imagination).

Imagine two branches and a stem that form the letter “Y”. There are two branch cells, and one stem cell.

Each cell contains just two numbers. One candidate of the stem cell will be a shared candidate with the adjoining branch cell. This results with a total of three unique candidates for the three cells in the form XY, YZ, and XZ.

You can safely remove the “Z” candidate from the cell(s) that share a relationship with the branch cells.

In the example shown the “Z” candidate, a 7, can be removed from the cell (R5,C8) circled in red.

Here is the logic and proof:

Following the “if-than-else” logic proves you can safely remove the “7” from cell R5C8.

You have just broken the logjam. You will be able to solve the puzzle quickly now by looking for naked singles. 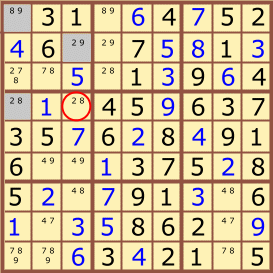 At the left is a variation of the XY-Wing pattern that occurs in my experience more often than the first example described above. It is also harder to spot.

Remove the two and the puzzle can be quickly solved.

If you would like to try to solve this puzzle, download and print out this PDF Sudoku very hard puzzle #3.

Sudoku XY-Wing Explained A Sudoku XY-Wing pattern occurs in many of the more difficult Sudoku puzzles. Your ability to identify and solve this pattern will often break the logjam and

Many people have asked me for step-by-step Sudoku directions for solving XY-Wing example number 1. If you have been puzzled about how I solved this puzzle, read this article. It seems